The Statistical Account of Scotland (Volume II), which was published in 1791 states “A golfing club was instituted lately by the gentlemen of the town and neighbourhood.” Though there is no proven connection with the subsequent Burntisland Golf Club, this date is commonly accepted.

The New Statistical Account of Scotland (IX), dated December 1836 states “A golf club has been in existence upwards of forty years.”

We do have strong claims to be older but accept 1797 as our date of inception as our Jubilee Trophy is inscribed thus: Presented by the Burgh of Burntisland Golf Club in commemoration of the Club’s centenary and of Her Majesty’s Diamond Jubilee.

If you would like to read any more about the early days of the Club there are still some available copies of the booklet which were published for the Club’s bi-centenary in 1997. These cost only £5 (exc. P&P) and can be obtained by contacting the Secretary – bgc1797@gmail.com 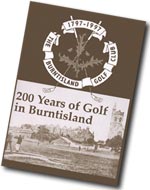